Today I have a special excerpt for you all!!!
I came across author Bronwyn Green in March of 2010 when I read her book

Just Right I loved it, her characters where well developed and the story was fully of wicked naughtiness just the way I love my books. After that I was hooked and have since picked up book after book of hers. This week she has a new book coming out - Sensuous Summoning, it's book 2 in her Witch Way Series.

~ Blurb ~
While casting a protection spell, Rowan Spencer gets the shock of her life. The spell goes very, very wrong, and she accidentally summons an ancient Celtic god.
A gorgeous, naked god.
Until Gwydion’s duty is complete, he’s bound to the human who summoned him. But as the poisons of earth drain him, he finds binding Rowan for his pleasure is sensuous task he’d enjoy for a lifetime—a lifetime that isn’t theirs to have.
BUY IT HERE: RESPLENDENCE, AMAZON, B&N

Rowan attempted to warm her hands around her steaming cup of tea as she scanned the text on her computer screen. She hadn’t been able to stop shivering since she’d returned from the orchard. It was worse now that she’d actually found a few scraps of information on the man she’d managed to conjure in the woods.
According to the research, Gwydion was a little-known, Celtic deity, The Lord of the Trees—one of the lesser gods. Remembering his sculpted body and piercing green eyes, she thought there had been nothing “lesser” about him. The way he’d stared at her still sent shivers of need careening through her body. She was pathetic. A remotely interested look from a hot guy and she was a quivering mass of want. The sensation of him cradled between her thighs, pinning her to the ground, should have terrified her. To be honest, it had, but it had also aroused her. And the vines…god, the vines. What the hell was the matter with her that she found that at all arousing?
What the hell was wrong with her that she found any of this arousing? She’d summoned a god. An actual god. For the briefest of moments, she was tempted to convince herself that she’d imagined it, but her clothes were still damp from where he’d secured her to the earth, and there was no way she could have come up with a man created from dead leaves and vines. She didn’t have that kind of imagination.
Her friend Meaghan wandered into Rowan’s room, carrying the teapot and a plate of warm, peanut-butter cookies. Meg set the plate of cookies in front of her and refilled the mug Rowan still clutched.
“Find out anything?” her friend asked, peering over her shoulder.
“Other than the fact you’re crazy enough to bake cookies at one in the morning? Not a ton. If this info is right, he’s a little-known, Celtic god of the forest.”
“Sheesh. I mean, I get the concept of gods, but to actually conjure one? I’m in awe of you.”
“Don’t be. All it means is that I screwed up the spell and am apparently capable of summoning mythological creatures. Not necessarily a skill I wanted.”
Meaghan shrugged. “I dunno. He sounded hot.”
Rowan hid her smile behind the rim of her mug. “I’ll give him that.”
“Seriously, think about how handy that would be. No more dating drama. Need a hot date? Just conjure one up. Forget getting your degree. You could have a whole new career opportunity here.”
Rowan sighed and took a bite of a still warm cookie, stifling a groan at the nutty, sugary taste.
“In fact, I haven’t had a date in forever,” Meaghan continued. “Let’s see…I’m thinking…tall, dark and bad boy. Can you set me up?”
A sudden pounding at the door had them looking at each other and checking the clock. Who would come over in the middle of the night? Rowan followed Meaghan through the kitchen to the back door.
“Oh. My. God.” Meg glanced at her, brown eyes wide. “I’m pretty sure it’s for you.” Turning back to the door, she opened it a crack, leaving the chain engaged.
“I would speak to the red-haired wench. Bring her to me.”
At the sound of Gwydion’s rough voice, Rowan’s stomach trembled nervously then dropped to her feet. What the hell? How had he found her? Well, he was a god. She supposed finding a particular human wasn’t that difficult.
“Um, Rowan…he’s naked.”
With dread-tinged excitement, she switched places with Meaghan and met his sharp, green gaze. Swallowing heavily, she said, “You’re still here.”
“I won’t leave until my purpose for being called for has been fulfilled. I have questions, and I need answers.” She opened her mouth to speak, but before she could, he added, “From you.”
“I’m not really comfortable letting you into my house.”
He arched a chestnut-colored brow as he stared at her. “I think we both know that if I wanted to hurt you, I would have done it already.”
“Did you leave out important details?” Meg whispered harshly from behind her.
“Look, it’s almost two in the morning. I’m tired. You’re…naked.”
A wicked grin curved his lips. “Normally, that would lead to a pleasant way to greet the dawn, but you’ve already expressed your feelings on that, too.” The rumble of his voice lodged in her center, turning her insides to liquid.
“You did leave out details!”
Do I got your interest now? Here's a little about BK#1 in the Witch Way series.
Book 1 - Immortal Curse

Cursed by a witch, Ian O'Meara has been trapped between the world of the living and the spirit realm for the last hundred and fifty years. Annoyed by having his eternity interrupted by amateur ghost hunters, he reaches through the veil to Emma Boulton, knowing she can see and hear him even if the others can't. When he discovers she can also feel him, he decides Emma is the most exciting thing to happen to him in the last century. Suddenly, escaping his miserable curse isn't quite so appealing.

Much to her dismay, Emma has been able to see ghosts ever since she was a child. Most of the time she ignores them, but Ian makes that all but impossible. With his dark good looks and his brooding personality, he's a gothic novel hero come to life...so to speak. She knows she should help him toward the light, but the only place he seems to be interested in is her bed. Falling in love with the charming spirit is all too easy, but is a future together possible between the living and the dead?


NOW... Want a chance to win a book?
Bronwyn has been so wonderful to offer up a books in the series (book and format of your choose) to one lucky winner! So tell me have you ever read one of Bronwyn's books? If so which one, if not which one of her books looks most interesting to you?
Winner will be chosen on May 9 at 11:59PM PST. and announced on May 10th - Good Luck! 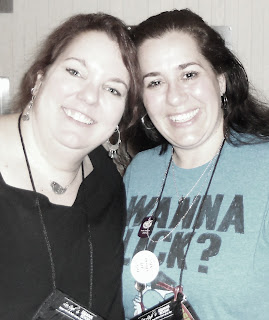 (Bronwyn and I at RT 12)
Thank you Bronwyn for sharing this great excerpt with us! You are welcomed back anytime.
For more on Bronwyn Green :
Blog
Writer’s Evolution
Facebook
Twitter
Pinterest Page
Posted by Drmgrl99 - Dawn at 6:00 AM