A Night Away by Carrie Ann Ryan + Giveaway

WOO HOO!! I'm so excited it's time for another installment in the Redwood Pack series by Carrie Ann Ryan. 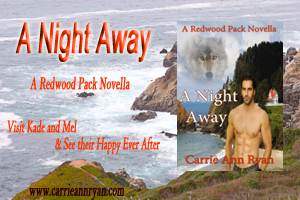 Book 3.5 in the Redwood Pack Series
A Night Away
Kade Jamenson has been mated to Melanie for almost two years. They’ve been through mating circles, battles, loss, misunderstandings, and finally, the birth of their son, Finn. The world is in turmoil around them as the Redwoods engage in war with the Centrals. But for Kade and Melanie, the turmoil is also happening at home. The responsibility of a restless baby and their Pack has taken a toll and they need a break.

Not from each other. But from their Pack. Just for a night.Kade takes Mel away for a romantic getaway and leaves Uncle Maddox alone with baby Finn. The Omega of the Redwood Pack may be adept at emotions but the idea of a baby may be beyond his immense capabilities.
Author’s Note: This is a novella set between books 3 and 4 to give you a taste of Mel and Kade. It is best that you have already immersed yourselves in the Redwood Pack world, however even new readers will enjoy a glimpse of one of the Redwood’s favorite couples.
~Excerpt

Kade Jamenson closed his eyes and prayed for resolution. A piercing shriek startled him, making him jump to his feet.
Finn.
Finn. His eleven-month-old son, who wouldn’t stop screaming, no matter what they did. The kid always needed something, either to be fed, changed, held, burped, played with, or just stared at. It seemed never ending. Even now that he was older, he still screamed or babbled constantly.
Dear God. How the hell did humans do this? Kade had more endurance than any human, witch, and most werewolves out there. Yet a tiny fifteen-pound baby with big blue eyes took every ounce of strength he possessed. Not to mention sleep time.
Kade groaned and rolled his neck before he walked into his son’s room. He and Melanie had painted the room in a soft green to match the Jameson eyes and added cream borders to break it up. Dark wood furniture filled the room along with cream linens covered with frog princes and bumblebees. Stuffed animals of every sort covered the tops of most pieces of furniture, gifts from his Pack and family, who cherished Finn like their own son. He took another step in and realized he hadn’t been the first one to answer his son’s call.

~About the Author
Carrie Ann Ryan is a bestselling paranormal and contemporary romance author. After spending too much time behind a lab bench, she decided to dive into the romance world and find her werewolf mate - even if its just in her books. Happy endings are always near - even if you have to get over the challenges of falling in love first.
Her first book, An Alpha's Path, is the first in her Redwood Pack series. She's also an avid reader and lover of romance and fiction novels. She loves meeting new authors and new worlds. Any recommendations you have are appreciated. Carrie Ann lives in New England with her husband and two kittens.
Carrie Ann loves hearing from readers. You can find her at:
Website | Blog | Heartthrob Haven | Facebook Author Page | Facebook Friend | Goodreads |
Twitter: @CarrieAnnRyan | Tumblr
Carrie Ann Ryan has a question for you...
Tell me what you want to see in post-HEA books?
All commenters will go into a drawing for a swag pack and $10 Amazon gift card. Contest closes 5/31 at 11:59pm and winner will be announced on 6/1.
Posted by Drmgrl99 - Dawn at 12:09 AM