“Where’s the DeLorean?” – Time Travel Devices v’s Just Being There 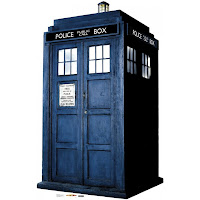 Marty hopped in the DeLorean when he whipped through time.  Dr. Who has the blue police box-look-alike TARDIS (“Time And Relative Dimension In Space machine), while the hero of The Time Machine had a really cool steam-punkish (even in the 1960’s) looking actual time machine.
The inventors and accidental tourists of several dozen of my favourite TV series, movies and books who have crossed time have all tripped over the time-space barrier with the help of space ships (and once, a whole battle cruiser ship ship), hand-held warping machines, room- and planet-sized computers and equipment, or sometimes just a man with really bad taste in clothes on the other side of the continuum handing out platitudes and advise while he smoked a cheap cigar and banged on a hand-held device that provided questionable data. 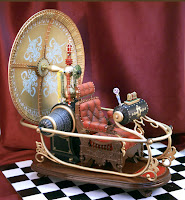 My point is, all these time travellers had equipment.  Machines.  A device.  None of them crossed time under their own steam.
Just “crossing over” without help of steel, rivets and bulkheads, bits or bytes, seems to be purely the province of the romance novel.
I’ve seen heroines step through pictures, cross open fields, drive into a tree and emerge on the other side (huh?), go to sleep and wake up “there”, and in the one romantic time travel movie I can recall in the last few years, she fell through a time warp (still no machinery – although the 19th century hero was a forward thinking who was into mechanical devices).

Steam punk may change this really broad divider, but I’m hoping we don’t have to wait for the steam punk authors to deliver us from lethargy.  I’m hoping a romance author, someday soon, comes up with a time travel tale that does involve gears, wheels, or computer chips, moving parts and/or rivets, just to defy the cliché. 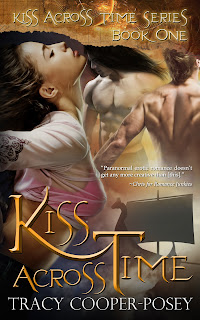 Kiss Across Time was released on May 1.

A single kiss can change more than one life…or two.
Taylor Yates is fired for insisting the 5th Century Arthurian poet, Inigo Domhnall, existed. When she hears Domhnall’s lyrics in a death metal song, she engineers a meeting with lead singer, Brody Gallagher. An unintended kiss sends them spinning back to the poet’s time, when Saxons were pillaging King Arthur’s Britain.

Brody’s all for kissing her again.  More, he wants her to kiss his friend and lover, Veris, to see what will happen.  When Veris’ kiss sends them back to the time of the Vikings neither man is willing to let Taylor simply walk out of their lives.

But Brody and Veris are more than lovers and sexual playmates, as Taylor learns when they investigate the kisses that send them across time.  The secrets they share have the power to completely alter her life.

The time-space continuum was restored to order at the end of this book.  Promise.

[She] has created characters that are engaging, unpredictable, outrageously funny and down-right appealing to readers who will steal their hearts.  Shannon for The Romance Studio 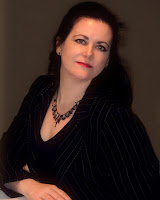 She turned to indie publishing in 2011. Her indie titles have been nominated four times for Book Of The Year and Byzantine Heartbreak was a 2012 winner.  She has been a national magazine editor and for a decade she taught romance writing at MacEwan University.

She is addicted to Irish Breakfast tea and chocolate, sometimes taken together.  In her spare time she enjoys history, Sherlock Holmes, science fiction and ignoring her treadmill. An Australian, she lives in Edmonton, Canada with her husband, a former professional wrestler, where she moved in 1996 after meeting him on-line.


I am giving away Bannockburn Binding as part of my mini tour for Kiss Across Time. So be sure to comment.

In the early 23rd Century, vampires learned how to travel back in time, and created a time-tsunami that threatened life as we know it, until they corrected their mistake. They created the Chronometric Conservation Agency, which is tasked with preserving history and therefore protecting humanity’s future. The Touring arm of the Agency offers trips back into the real past, with vampire guides, called travellers.

When Natalia (Tally) Marta, vampire and traveller, takes her client to visit the siege of Stirling Castle in 1314, she is caught and held hostage for ransom by Robert MacKenzie, a Bruce clansman. Rob finds himself drawn to the wilful, stubborn and very different English lady he has captured and the relationship becomes an intimate, highly-charged sexual pairing. Swiftly, Tally and Rob realize their bond is more than sexual, that the emotions stirring their hearts are true.

Christian Lee Hamilton, vampire, one of the last true southern gentlemen, and Tally’s ex-lover, knows the 1314 time marker enough to jump back and help Tally return home. His arrival at Bannockburn adds complications, for Christian finds himself drawn to Rob MacKenzie as much as Tally is. But neither of them can stay in the past forever. To do so means certain death.